GB Railfreight attended the opening ceremony of the rail head extension project at Potter Logistics’ Selby rail terminal on Thursday, July 24th. This was a significant moment for both companies, as it means the site can now accommodate longer intermodal freight trains on the network from the Port of Felixstowe into the terminal.

Construction on the project has involved the extension of the terminal’s head shunt from 468m to 775m. Large quantities of recycled products were employed on both the civil and rail track elements.

As a result, GB Railfreight will now be able to operate 32-platform trains (610 metres) on MSC contracted services from the Port of Felixstowe later this year. These will be a combination of both Ecofret and FEA wagons, responding to its customer’s demand for more 40ft container services.

GB Railfreight maintains that, in order for the rail freight industry to take advantage of the growth potential that exists in the intermodal market, there needs to be the right port and inland infrastructure to accommodate development. Improvements at Potter Logistics Selby terminal are a prime example of the private investment needed to promote such infrastructure.

John Smith, Managing Director for GB Railfreight, said: "We are delighted with  the investment undertaken by Potter Logistics to extend its head shunt at Selby rail terminal and want to thank them for their commitment and hard work?

"I have reiterated time and time again GBRf’s intentions to expand services out of the Port of Felixstowe, and this infrastructural development allows the company to be true to its word. The intermodal freight market has the potential to grow, but in addition to work undertaken by companies such as Potter Logistics, we need the Government to further incentivise strategic investment from the rest of the private sector in both inland and port infrastructure.

"Once we start using our new Ecofret wagons in late 2014, we will be operating the longest intermodal freight trains on the network, indicative of the innovation and drive for productivity that lies at the heart not just of the MSC service, but every service we offer. We hope similar infrastructural developments across the country allow us to continue to grow into 2015." 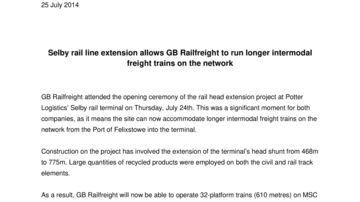