GB Railfreight made history on Thursday 28 March 2013 when one of its class 66 locomotives hauled the first official through train from London Victoria onto the Bluebell Railway at East Grinstead.

The locomotive hauling the inaugural service was then named at Horsted Keynes after the heritage railway by John Smith the managing director of GBRf.

Smith paid tribute to the railway and its determined group of volunteers who have spent many years fundraising and working hard to make the breakthrough.

"To connect the Bluebell to the national railway network has taken years of dedication and fundraising and the clearance of huge amounts of material - including the 60 foot mountain of domestic waste that had been deposited in the Imberhorne cutting over 40 years ago.”

Closed in the 1950s under something of a cloud, the Bluebell’s 500m long Imberhorne cutting had been earmarked for landfill by the local authority who, during the late 1960s and the early 1970s, deposited into the site some 300,000 cubic metres of domestic waste – enough to fill Wembley stadium almost to the rafters.

The Bluebell commissioned GB Railfreight in July 2010 to run a week of trial trains to begin to remove the waste.

The project proved once again that GBRf is innovative in its thinking and delivery.

The rail haulier initially worked out a plan to take it away using class 66 motive power, supported on occasions by class 73s, in rakes of 18 MLA (Falcon) wagons.

An initial week of trial trains ran in this formation. Setting up this trial involved several parties, including Land and Water who were the engineering contractors on site. Network Rail was very supportive and took measures to ensure their infrastructure would support regular heavy freight services over a route normally only used by commuter trains.

But GBRf felt they could do better and, thanks to some imaginative planning and working with contractors on site, the freight hauliers managed to run 20 wagon trains, giving the Bluebell a much improved value for money with a 12 percent increase in train capacity for a marginal increase in fuel costs.

A change in the train loading methodology by splitting and shunting the train to load in smaller portions also gave economies by reducing the amount of plant on site.

Moving the waste material by train saved the roads of Mid Sussex from the potentially damaging presence of thousands of lorries.

Each GBRf train shifted the equivalent of around 100 lorry loads of rubbish. With around 80 trains in the overall programme of works the rail operation saved approximately 8000 lorry journeys.

“The completion of this project is another job well done by GBRf,” concluded Smith. “Everyone in our company does the best they can for our customer.

“That is, I believe, the difference between us and our competitors, whether rail or road.” 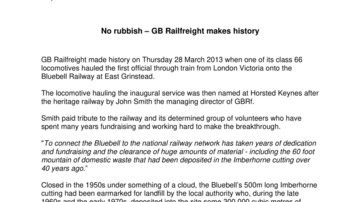