GB Railfreight, one of Britain’s leading rail freight companies, has expressed “deep disappointment” at plans to increase charges for operators to access the rail network.

Responding to an announcement from the Office of Rail Regulation (ORR) that it intends to increase the variable usage charge and introduce a new charge for the haulage of coal, iron ore and spent nuclear fuel, GBRf managing director John Smith said:

“The rail freight industry has been a major success story since privatisation in the mid-1990s. In that time growth in tonne kilometres carried on the network has gone up by almost 50 per cent, with half the number of locomotives and two thirds of the wagons used at the time of privatisation.

“With further growth of 4 per cent each year for the next 15 years predicted, we need to ensure that the industry’s competitiveness is maintained.

“However, these deeply disappointing plans could threaten this competitiveness and counter the ORR’s duty to promote the use and growth of freight on rail.”

Mr Smith added that GBRF would now study in detail ORR’s decision before making any further comment. However, he pledged that the company would do everything in its power to protect its customers and called for further investment.
Since privatisation, £1.5bn has been invested in rail freight by the private sector, helping to significantly reduce the number of lorry journeys on Britain’s roads and allowing the Government to meet CO2 targets. HGVs are responsible for 20 per cent of carbon dioxide emissions from domestic transport, whilst rail produces 70 per cent less carbon dioxide than road per tonne carried for the equivalent journey.

Rail freight’s ability to continue this level of investment is not only an essential part of the government’s environmental strategy but also critical to Network Rail.

The infrastructure owner - the largest procurer of rail freight in the country - relies heavily on a healthy and profitable rail freight sector to service the maintenance of its network. 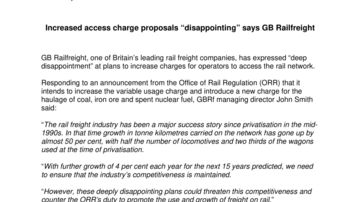