Today (10th May), during a ceremony at the National Railway Museum in York, GB Railfreight (GBRf) unveiled the name and livery of locomotive 66779, the last Class 66 to be built for the UK and European markets.

GBRf has named locomotive 66779 “Evening Star” and it has been liveried in lined passenger express ‘brunswick green’, in commemoration of the last steam locomotive of the same name to have been built by Swindon Works for British Railways in 1960.

This is an historic moment for the industry. The Class 66s have made a major contribution to UK rail freight, transforming reliability since their introduction in 1998. In recognition of these achievements, GBRf has promised to donate 66779 to the National Railway Museum National Heritage Committee at the end of its working life, to be preserved for the benefit of the public.

The event was also a celebration of 15 years of operations for GBRf. Starting off with just two employees and an infrastructure contract with Railtrack in 2001, the freight operator now employs over 650 staff, operates over 1,000 train loads each week for clients across the energy, aggregates, intermodal and infrastructure markets, and generates annual turnover in excess of £130m.

The freight operator was joined by over 200 guests from across industry, government and the media for the ceremony. GBRf Managing Director John Smith and Progress Rail Services and Electro-Motive Diesel (EMD) CEO Billy Ainsworth delivered speeches before 66779 was unveiled.

John Smith, Managing Director of GB Railfreight, said:
“This is a hugely historic moment for the rail industry. The Class 66 locomotive is probably the most successful design to ever run on Britain’s railways, and we have decided to honour their achievements by naming the last 66 to be built after British Rail’s classic 92220 ‘Evening Star’.

“As a life-long railway man, it makes me immensely proud that my company has the opportunity to own the last 66 off the production line for use on our operations across the country. In recognition of the achievement of this locomotive, we will be donating 66779 to the national collection at the National Railway Museum at the end of its working life, so it can join 92220 and be preserved for the enjoyment of everybody.

“Today also marks 15 years of operations at GBRf. It was not long ago that we started out on our first infrastructure contract with Railtrack and we’re now operating over 1,000 train loads a week. We could not have got here without the hard work of GB Railfreight employees, past and present, and I would like to take the opportunity on this special day to thank all of those that have given so much to GB Railfreight along the way.

Billy Ainsworth, President and CEO of Progress Rail Services, said:
“We are honoured to be a part of this special occasion with our long-time partner, GBRf, and value the solid relationship we have forged over the years. Although today’s event signifies the close of a memorable chapter for our highly reliable EMD Class 66 locomotives, it opens another as we continue to lead the industry with the development of other world-class diesel electric locomotives.”

Paul Kirkman, Director of the National Railway Museum, said:
“We are proud to host this event marking this significant milestone in railway history. Our museum tells the story of how the railways shaped and continue to shape our world, and therefore is the perfect place to showcase the latest developments in the modern railway industry.” 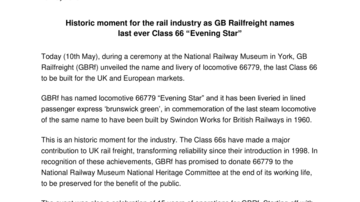