GB Railfreight yesterday (Tuesday 22 December) ran a special Christmas intermodal train from Maritime Transport’s Birmingham Intermodal Freight Terminal, Birch Coppice, to the Port of Liverpool. This is the first time a service has been run between the two sites.

This is an important moment for Peel Ports (owner and operator of the Port of Liverpool), GB Railfreight and Maritime Transport, as it demonstrates the potential of running regular container services between Birmingham and Liverpool, providing an alternative to moving containers by road. The development of Liverpool2, a new deep water container terminal, will increase the demand for land transport solutions.

Earlier this year, GB Railfreight ran its first intermodal train from the Port of Felixstowe to Birch Coppice, on behalf of Maritime Transport.

John Smith, Managing Director of GBRf, said: “The running of our special Christmas train to the Port of Liverpool demonstrates that there are huge intermodal rail freight opportunities that could arise from the Liverpool2 logistics project, and we will be working with our partners to build awareness amongst existing and new customers.

“The container market is an important source of growth for the industry, and it’s vital that we provide the terminal and network infrastructure that allows us to meet present and future consumer demand.”

“The ongoing investments and growth at the Port both in quayside and landside infrastructure and in turn onward connectivity further cements Peel Ports commitment to our partners and customers in delivering a new multi-modal solution to the UK”.

John Williams, Group Managing Director of Maritime Transport, said: "We look forward to handling a regular GB Railfreight train service between the Port of Liverpool and BIFT, our modern Strategic Railfreight Interchange, at Birch Coppice and the potential opportunities arising from a rail connection with the Port of Liverpool. We operate a first class Railport and an extensive road fleet at BIFT to support customers with intermodal services to and from the Midlands." 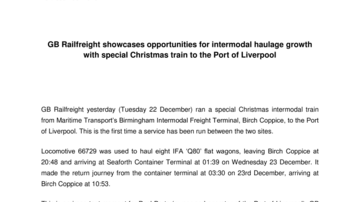