Today (24 March), GB Railfreight tested the first freight train on the Ipswich Chord, which is due to open commercially next week (31st March). The project will join the Great Eastern Mainline to the East Suffolk Line.

The chord forms an important part of Network Rail’s strategic freight network, a programme of investment to improve freight capacity across Britain’s railways. The total cost of the chord was £59m and the project was co-financed by the European Union Trans European Transport Network (TEN-T).

It will allow operators to directly access the Midlands from the Port of Felixstowe without having to go via London, and eliminates the need to change direction at  Ipswich goods yard.

This brings significant benefit to the freight industry as capacity is freed up on the network, journey times are reduced and longer trains can be run. As a result, it will support the growth of the Port of Felixstowe.

“GB Railfreight welcomes the opening of the Ipswich Chord and is proud to have run the first freight test train today.

“We thank the Government for investing in the Chord as it represents an important development for the rail freight industry, and allows us to assist the Government in its drive to take lorries off of our road network.

“Being the first company to test trains on the line is testament to our support for the project and reflects our intentions to work with the Government to promote other ambitious developments across the freight network in order to support the growth of rail freight.” 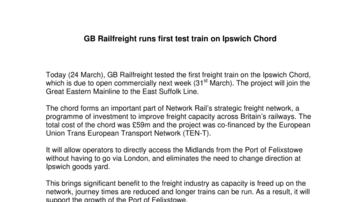