GB Railfreight managing director John Smith told the House of Commons Committee for Energy and Climate Change that Government departments must produce a ‘joined-up’ policy on the transport of biomass.

Appearing before the committee, together with representatives from Drax Group, Green Circle Bioenergy and Estover Energy, Mr Smith said: “I have a level of frustration about the lack of co-ordination between the DfT, the DECC and the ORR. We are currently going through a number of reviews into our industry including one looking at charges for our rights of access to the network. There is also a question of capital investment within Network Rail’s strategic rail fund and, running in parallel, there is development of biomass consumption by power stations. I have a sense that these elements are not being reviewed together. All I would ask is that those issues are joined up so the effect and impact of each is clear.”

Asked what would be the effect of the ORR’s proposed £1 to £1:50 per tonne access charge for the carriage of biomass on the network, Mr Smith told the committee: “The Rail Regulator’s proposals could add £11,000 to £16,500 per train to the cost of carrying biomass. Whether that is affordable and would encourage us to carry the material needs to be seen in the light of what the DECC decides in relation to ROCs credits. My view is that the charge should be withheld until the development of the biomass market becomes clearer, probably in about 10 years’ time”.

In an earlier submission Mr Smith told the committee it was vital to focus strategic freight network funding on improving connecting rail links between deep-water ports and power stations ready to convert to biomass as well as to ensure adequate deep-sea capacity at UK ports to allow ‘Capesize’ vessels to dock. 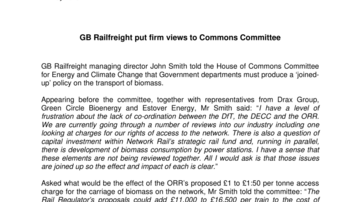