GB Railfreight was last night named as Operator of the Year at the annual UK Rail Industry Awards 2015.

At a ceremony attended by industry decision-makers and the supply chain, the company picked up the prestigious award for Operator of the Year beating off stiff competition from three passenger rail operators in the category shortlist.

The award recognises GB Railfreight’s substantial achievements over the past year. In 2013-14, the company’s turnover exceeded £100m for the first time. Using innovative and bespoke solutions, technological advancements and capital investments, GB Railfreight has been able to improve performance levels and optimise outcomes for its customers.

GB Railfreight was awarded the prize by a 21-strong independent judging panel from across the industry.

The UK Rail Industry Awards are run and organised by Rail Technology Magazine and entries are open to anyone working within or supplying to the UK rail industry. This is the second year of the awards, with the ceremony held at Battersea Evolution in London on 19th February 2015.

John Smith, Managing Director of GB Railfreight, said:
“GB Railfreight is really proud to have won the award for Operator of the Year. It is testament to the hard work and dedication of over 650 members of our team in offices and depots across the country. It has been a huge year for us and I want to extend my gratitude to every single one of them.
“The award is also an important recognition of the rail freight industry, which works around the clock to deliver for customers and keep the UK economy moving”. 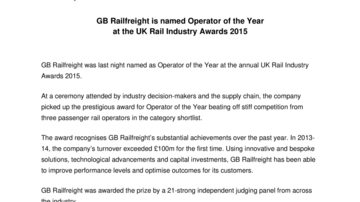