GB Railfreight has announced that the first two Ecofret triple-platform wagon sets, as part of 17 secured with VTG Rail UK Ltd on a long term lease, will be arriving at its premises in Doncaster International Railport today (12th November 2014).

The two wagons started the journey from Wabtec’s facilities in Kilmarnock at 11.21am, hauled by GBRf’s locomotive 47812, down the West Coast Main Line to Carlisle and then along the Cross Country Route, eventually arriving in Doncaster at 10.38pm.

The initial batch of frames for these wagons reached Kilmarnock two weeks ago and Wabtec’s engineering team have subsequently been assembling the wagons onto bogies, and commissioning them for operational use. This process will be repeated weekly until mid-January 2015, when the final Ecofret frames will have been delivered to the UK.

GBRf believes the addition of these wagons to its current fleet is an important development for the company, allowing it to better satisfy its customers’ demands for 40ft boxes from the Port of Felixstowe and make more effective use of capacity.

“GB Railfreight is delighted to announce the arrival of VTG Rail UK Ltd’s first two Ecofret wagons at Doncaster. These will have a significant impact on the services we are able to offer our customers from the Port of Felixstowe, as it will allow us to adapt to the increased demand for 40’ containers. VTG has really revolutionised container transportation with this new wagon and we are looking forward to January 2015, when the final frames arrive.” 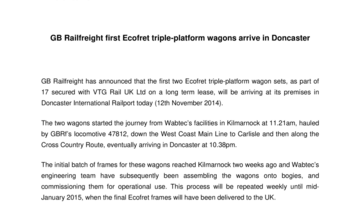