Locomotive 66751 will be used as a dedicated resource to haul Hitachi Rail Europe’s Class 800 pre-series train for the InterCity Express Programme (IEP) between RIDC and the East Coast Main Line.

John Smith, Managing Director of GB Railfreight, said:
“We’re delighted to be supporting Hitachi Rail Europe with its testing programme for IEP. This ceremony highlights our commitment to the project, and the name
“Inspiration Delivered” successfully reflects the wider innovation and reliability of Hitachi Rail Europe’s business. We aim to carry out the testing effectively and support Hitachi Rail Europe in its delivery of IEP.”

Andy goes on to say:
“We would like to thank all our industry partners and key stakeholders for their support today and we look forward to inviting them all to the opening ceremony of the Hitachi  Rail Europe Newton Aycliffe Rail Vehicle Manufacturing Facility very soon.” 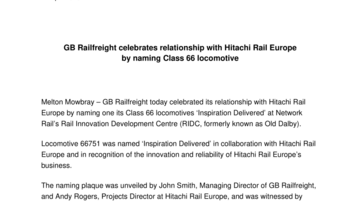