GB Railfreight (GBRf) has raised a record £125,100 for its selected charities, following a four-day charity charter train tour of the UK. The achievement marks 15 years of operations for the company.
Starting on 8th September, the tour saw passengers travelling to an extensive array of locations across the UK, including Swanage, Harwich, Inverness and Liverpool, being hauled by locomotives that included Class 87s, Class 59s, Class 20s and the famous ‘Evening Star’.

The freight operator was supported by their suppliers Harry Needle Railway Company, Riviera and Colas Rail, and infrastructure provider Network Rail, in order to make the tour a possibility.

“Every year, our staff and their families go that extra mile to raise funds for our nominated charities.  With this four-day charter tour, Paul Taylor and his team took it that stage further.

“The culmination of two years’ worth of discussions and over a year of planning, they came up with a programme that, when tickets went on sale, almost sold out within the first 24 hours.

“I’d like to thank the GBRf staff and all of our suppliers, who helped make the charity charter tour happen, raising a record figure of £125,100. I can’t begin to imagine what the team will come up with next to build on these achievements.” 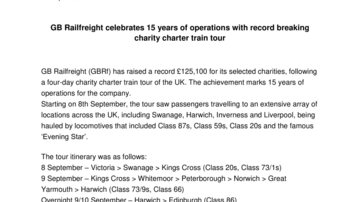