Whilst recognising that parts of the electric spine are good for rail freight, John Smith called for the prioritisation of certain corridors – such as Birmingham-Nuneaton – in order to encourage the industry to invest in electric locomotives.

The freight-focused evidence session was part of the select committee’s wider inquiry into  “Investing in the Railway”, which seeks to scrutinise the impact and deliverability of Network  Rail’s current and future investment plans.

At the evidence session, GB Railfreight also called for:

GB Railfreight was invited to give oral evidence, having submitted written evidence to the  committee.

John Smith, Managing Director of GB Railfreight, said: “At the moment, the majority of  electrification schemes in the UK support the passenger network.

“With freight, there are certain markets that suit electric haulage, such as intermodal, but there is a need to prioritise electrifying the routes that serve them.

“Prioritising the electrification of specific strategic corridors, such as Birmingham to Nuneaton, will help incentivise the industry to invest in electric locomotives.

“Intelligent electrification is important if the Government is to encourage the modal freight shift from road to rail.” 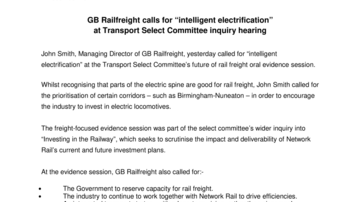