GB Railfreight (GBRf) today [18 April] ran its first journey for Belmond Royal Scotsman, as it announced the company has signed a five-year contract.

Locomotive 66746, painted in special Belmond Royal Scotsman livery, started its three-day tour from Edinburgh at 13:44 and is scheduled to arrive in Kyle of Lochalsh tomorrow [19 April] at 18.03. It will make its return journey to Edinburgh on 20 April, via Aviemore and Dundee, arriving at 09:48 on 21 April.

GBRf will be delivering train crew and traction and a special liveried Class 66 will deliver approximately 50 multi-day tours each year, during the Belmond Royal Scotsman’s scheduled season between April and October, hauling the train’s luxury sleeper carriages.

This is a significant moment for GBRf as it represents another step in the expansion of the freight operator’s rail services business. It follows the operation of numerous football charter journeys across the UK, as well as the provision of train crew and traction for Scotland’s iconic Caledonian Sleeper franchise.

John Smith, Managing Director of GB Railfreight, said:
“Over the last two years, GB Railfreight has seen extensive growth in its rail services business as we help provide train crew and traction for important passenger services such as charter football trains and the iconic Caledonian Sleeper.
“We are delighted to be working with Belmond to support its luxury Belmond Royal Scotsman service and will ensure that we use our extensive experience to ensure that its passengers continue to receive a level of service that befits its prestigious reputation.”

Commenting on the new partnership, Gary Franklin, Managing Director, Trains and Cruises at Belmond, commented:
“GB Railfreight has an excellent reputation within the rail industry and we are pleased to be working with the team over the next five years to haul the luxury sleeper carriages of Belmond Royal Scotsman." 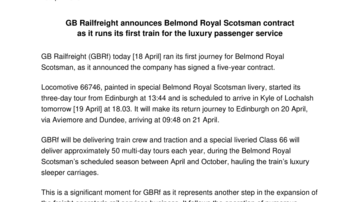